Here are some scans of  the programme for a night out at Jollees nightclub to celebrate the “centenary” of Port Vale FC.

Ironically, leading Vale historian Jeff Kent believes that the club’s formation year is more likely to be 1879 rather than the official 1876 date adopted by the club and which lead to this night-out.

The Port Vale centenary evening took place on October 27th at local night club Jollees where the likes of the Barron Knights would entertain the crowd while well-known local DJ Mel Scholes was the compare for the night.

We have also included a page of adverts from the programme including a line-up of the acts to appear at Jollees, along with the bar prices. 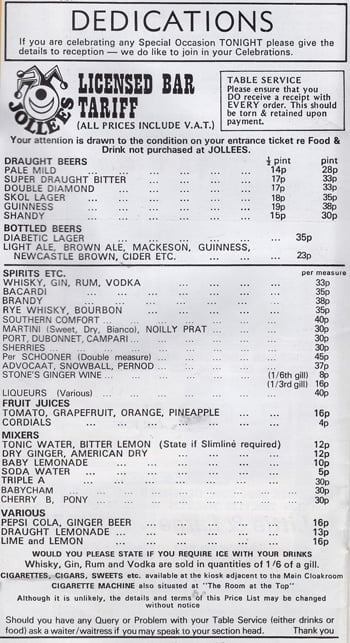 Please share this on:
The Port Vale War Cry anthem Why Vale tried to sign the 60’s Mourinho