Port Vale’s chaotic 24 hours took another twist as midfielder Ryan Burge hit back via Twitter after manager Micky Adams had told the press that the player was set to be disciplined for missing a team meal.

Midfielder Burge has impressed fans this season and is currently joint-top of the OVF player of the season leaderboard but he is likely to face further action after sending yet more controversial tweets.

Burge sparked controversy on Tuesday with a tweet that criticised the club.

However, following the game, manager Micky Adams insisted that Burge was originally included in the starting eleven but was late for a team meal at 4:30pm. Adams told the Sentinel that “Ryan didn’t turn up for the pre-match meal. He should have been at the hotel at 4.30pm and he still wasn’t there at 5.15, so what am I supposed to do? Then he puts a load of rubbish on his Twitter feed. It’s absolute nonsense and he’s going to be disciplined.”

However, Burge has hit back via Twitter claiming that he sent “numerous unanswered calls and texts” and that he was supposed to be picked up at a service station rather than make his own way. Burge also hinted that he was fit to play in Saturday’s game against Southend United. 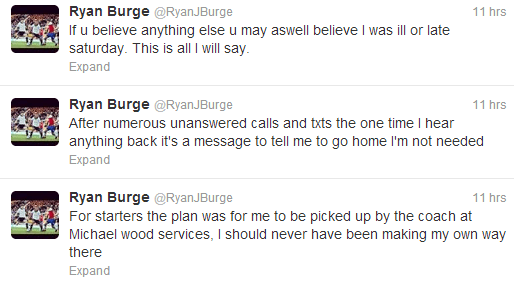 Please share this on:
Adams hits out at ‘disgusting’ abuse from some fans Trialists play for Vale reserves

Ryan Burge bizarrely offers to be next Port Vale manager