The Second Division game took place after both Stoke City and Port Vale rejoined the Football League in the months prior to the fixture. Stoke had resigned in 1907 and were re-elected in 1919, but Vale unfortunately missed out on re-election by one point.

However, the Valiants were soon back in the League via another route as Leeds City were expelled for illegal payments and the Vale took over their fixtures for the 1919-1920 season.

That fixture list included a clash with their neighbours Stoke City in March 1920. The balance sheet (shown below) shows the Valiants took just under £1,300 in gate receipts from the crowd of 22,993 at the Old Recreation Ground. The healthy receipts from this fixture almost certainly helped the club record an overall profit of £650 for their first season back in the Football League. 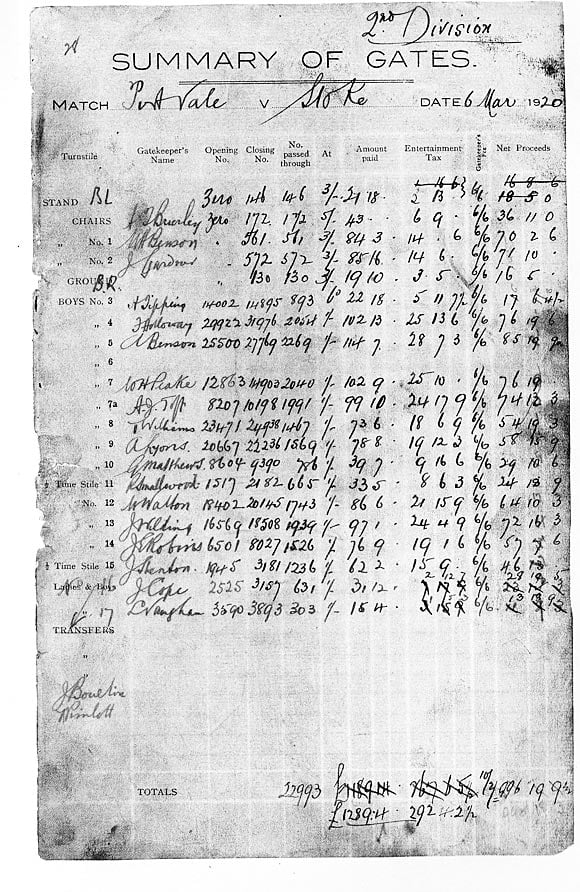 However, things were not so rosy on the pitch as Vale suffered a 0-3 loss to their neighbours (although they held Stoke to a draw in the reverse fixture and recorded thir first win over the neighbout with a 2-1 win the following season).

Please share this on:
Valiants since 1876? Sorry, you’re 43 years out! Where is he now? An update on Andy Jones