Brothers in arms versus Barnsley, 1979

Port Vale history was made during a Division Four game against Barnsley in April 1979. It involved two homegrown youngsters in the early stages of their careers with the club.

In 1979, struggling Port Vale were set to face Barnsley in a Division Four game. The match ended in an exciting 3-2 win for the Vale (Neville Chamberlain, Bernie Wright and Ken Todd on target) but the game was more significant for the pairing of Chamberlain brothers Mark and Neville in the Vale attack.

Neville had already made history by becoming the first black player to sign professional terms with the club, but the pairing of Neville with younger brother Mark was the first time two brothers played in attack for Port Vale during the same game.

The following photograph was taken from the Port Vale versus Bradford City programme (pictured right) from the same season. 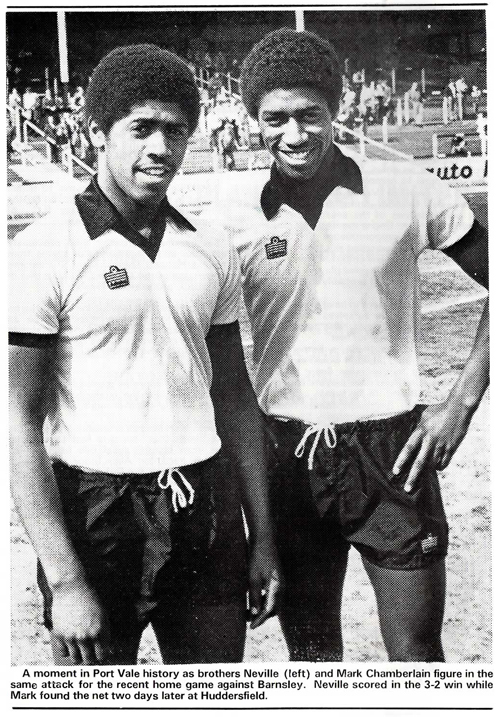 The brothers played many more games in tandem before they were jointly transferred to Stoke City in 1982. Mark subsequently became a full England International and his son (Alex Oxlade Chamberlain) currently stars for Premier League side Arsenal. Neville went on to manage several local non-league sides after retiring from playing.

Neville made a total of 141 league appearances (32 goals) while Mark made 96 appearances and scored 11 goals. Both Chamberlains were highly talented players but they were also able to use their familial traits to gain an advantage in other ways. According to Jeff Kent’s Port Vale Tales book, the pair used to regularly swop shirts during the half-time interval in order to confuse the opposition players marking them!

Please share this on:
1954 salute to Port Vale cartoon The day Ryan Giggs hit a brace against Port Vale