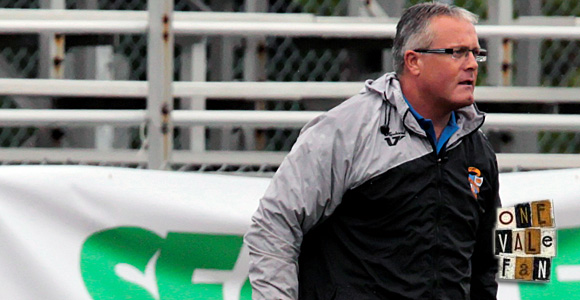 Port Vale were unable to gatecrash Swindon’s promotion party as the rampant hosts put five past the Valiants at the County Ground.

During an entertaining start, the home side pressed early on and Vale were grateful for some good defending from John McCombe and the impressive Joe Davis.

Good work by Loft created a good chance for Shuker and then Richards headed over from Shuker’s free-kick. Richards went close again when he latched onto a misplaced ball and almost rounded the keeper.

Despite the Vale chances, it was Swindon who took the lead through a wonderful goal on 39 minutes from dangerman Ritchie. The right winger smashed the ball into the top corner giving Martin no chance.

And six minutes into the second period, Swindon wrapped up the League Two title when giant striker Paul Benson converted to double the home side’s lead.

Town made it 3-0 on the hour mark when Benson scored his second of the game after good work down the left by Holmes. Three minutes later it turned into a rout as centre-half Flint made it four.

Swindon were starting to run riot and Martin was forced into a number of fine saves. But despite desperate defending, Swindon made it 5-0 with minutes remaining.

It was a chastening experience for the Vale, but they will be hoping that under new ownership that they may be in the promotion mix-up next season.