Why does a veteran, signed on a non-contract basis from Rhyl make our hall of fame? 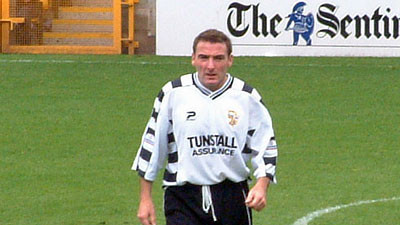 Veteran John Durnin in action for Vale
(note: he didn’t move very much or very fast!)

John Durnin’s professional career spanned two decades. Only two years were at Vale Park, so has he done enough to earn a place in our cult hall of fame?

I would argue he has. For a start, Durnin has the chequered past that all cult legends need. He started his career in the non-league with Waterloo Dock before earning a dream move to Liverpool, he never made the grade at Liverpool but had great success with Oxford and Portsmouth. He had the nickname “Johnny Lager” at Portsmouth and was also named as a cult hero by Oxford fans.

When he joined Vale in 2001, it was hardly a glamour move. The 36 year-old had been playing non-league football with Rhyl and was receruited on a non-contract basis. At the time, Durnin told the BBC: “If I can stay until the end of the season then all the better for me and it means I’m doing something right.”

Well, Durnin exceeded expectations. A diminutive figure on the pitch, he actually managed to look older than his 36 years, but while his pace and power had dimished, his skill and quality remained.

He added a much-needed calming presence on the pitch and he helped Vale to mid-table safety in his first season. Durnin impressed enough that his contract was extended to include a player-coach role and he stayed at the club until 2003 when he finally departed on a free transfer.

As a footnote, after all these years Durnin, a life-long Liverpool fan, has finally achieved his burning ambition. After being released in 1989, Durnin is once again a Liverpool first-team regular – only this time as part of Liverpool’s successful Masters’ team.